In February 2017 we went to Iraq on our first mission there. The camp was situated a few kilometers from Mosul. Wlile approaching the camp we could see, in the distance, the smoke and we could hear the sounds of war.

Someone, who works with our association, stayed there trying to understand how we could help the thousands of people trapped there and that should be evacuated through the help of international organizations. By May, they say, everything will come to an end, and milion of people will need help and relief. Often we ask ourselves: ” why we went there”?
We already know the answer: ” there, too, there is need of assistance, just as in Turkey and Jordan where we will carry on with our missions.

In one of the Kurdish Yazidi refugee camps we found Elisa, the little girl you see in the picture, suffering from Epidermolysis bullosa.

She is 3years old and lives in an organized refugee camp, one of those camps well structured, with proper, tidy tents, with access to drinking water. One of those camps with the army at the entrance and soldiers on the boundaries. You can get in just if you have a Yazidi guide, if you do not speak Arabic and inside the camp it is forbidden to take photos (the only ones we took was at our risk and danger). Are organized camps better than the free, non official ones ? We are not sure. In the camp where little Elisa lives, the atmosphere is tense and unreal. You breathe the war climate even if the area is protected. 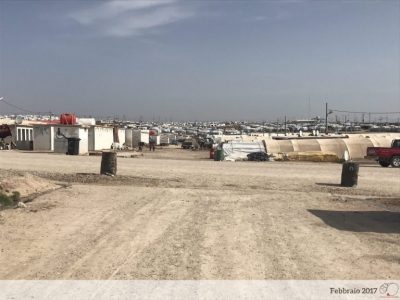 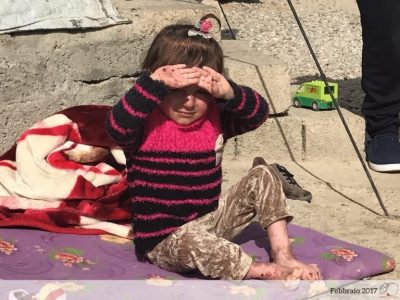 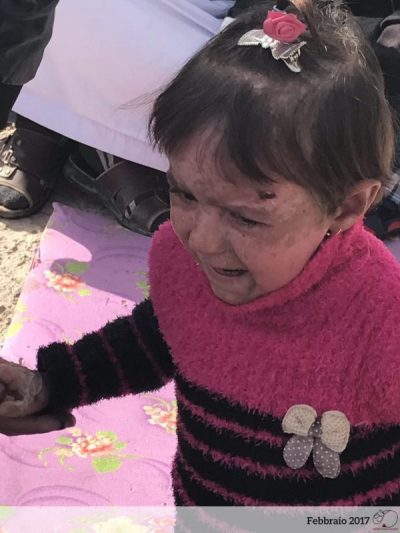 Not too far away, outside the organized camp, in a shanty town where some yazidi curdi live, we found Dilgash, he too suffering from Epidermolysis bullosa. His illness is very serious and he suffers a lot. He is only 9 years old and at night he is awakened by shooting pains that afflict his little body. Dilgash lives in a shack, one of many you find everywhere around. There, the living conditions are difficult to describe, they have nothing, no water, no food, no toilets. It is difficult to breath due to the stench.

Elisa and Dilgash do not know each other. They both escaped with their families from their villages. At least they still have a family. During the short time passed in the camps, we have listen to terrifying, abominable stories, stories that bring back to the last century . Stories of mass graves, violence against women and children. Villages burned by Isis. Stories of men forced to choose whether to convert to Islam or die. In this case they will be executed in front of their wives and children.

We are not sure if the two children will survive. Marino Andolina , the pediatrician, who is always with us during the missions, has strong doubts because, being a genetic illness, it is in a very advanced state.

What we want to do is try to relieve their pain for the remaining time.

Will we be able to operate Dilgash at least on the hands and feet and bring him a wheelchair so that he can move?

The mission was particularly heavy. We arrive, we watch and then we go back home. They remain there to suffer unimaginable pains.

Back to Italy with a heavy heart . We cannot abandon them. We will be back soon! Once you have met them, it is difficult to forget their eyes full of pain, hope and strength.

Thanks for the photographs to: